Well, this year’s trip got off to a great start. We stopped by the Errol Dam on Sunday evening, shortly after we got settled in our cabin. It didn’t look promising at all, as there were no fish rising in the middle portion of the river where I was, and only a few showing on the east bank where Tony was. So, to say I was pleasantly surprised by the following event would be an understatement.

I made two blind casts (no particular target) with no sign of a fish. My next cast was at the base of the dam. The #14 Elk Hair Caddis drifted into a seam that brought it within a few feet of me. Suddenly there was a splash and a miss on the fly. I repeated the cast two more times with the same result. I made my next cast a little more to the far side of the fish so as to give him a longer and better view of the drift. It worked. This time the fish took the fly going dead away from me. I could see the dark and pointed head as he grabbed the fly going away.

I knew instantly that it was a salmon. He did what a salmon does, jumping two feet into the air after being hooked. I saw him clearly then and turned to get Tony’s attention, but he could not hear a thing over the roar of the river. Finally, he looked up and at me just as the salmon jumped again. Tony knew at that point that his help would be needed to net this fish in that current. He made his way over the sluiceway to me just as I brought the salmon to the edge of the rocks. A minute later the salmon was in the rubber net. 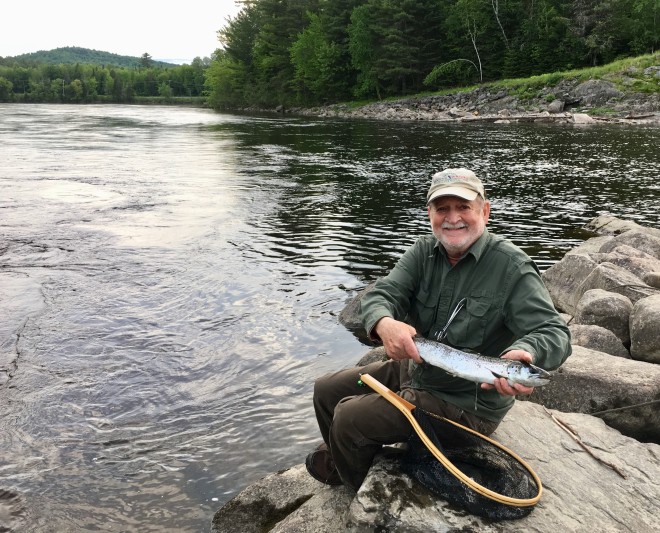 We guessed it was 20”. We didn’t have a ruler with us, but we grabbed a stick and broke it to the fish’s length. Back at the truck the stick would measure 20”+. We gave the fish some time to revive and then released him back to the river.

It was a great start to our trip.