Here we are in just about the middle of the meteorological winter with less than 40 days until March.

What started out a little mild, eventually turned to record cold in terms of temperature and time. We were probably near a Winter Severity Index (WSI) disaster. Add that to some significant snow earlier in December, 31” by my tally, and things were looking very gloomy.

As I explained in previous blogs tagged “WSI,” such as “Winter Severity Index Report for 2015,” a Winter Severity Index (WSI) day is any day that the snow is more than 18” deep or the temperature is below zero. If both of those criteria are met in the same day, it is then a 2 WSI day.

A flock of turkeys that I saw regularly was getting decimated by the sub-zero nights and days, aided by strong winds. At first there were eight. Then a few days later there were five, and finally I saw only two. 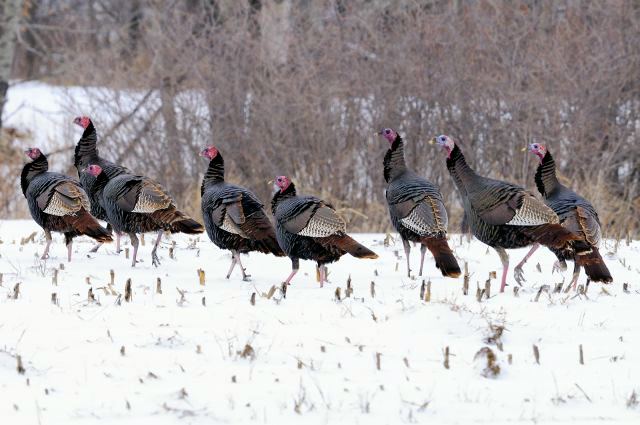 Turkeys in the Snow

The others *probably* froze to death while roosting. We’ll never know, as any carcasses are surely consumed by a host of predators and scavengers. That said, I have seen two flocks of more than a dozen birds during this thaw.

By my tally, we had 14 WSI days in the last week of December. (Again, that’s two for each day that the snow was more than 18” deep and the temperatures went below zero.)

January continued that trend for the next week with another six, 2-WSI days. As the temperature rose, it was only the snow that was adding to our WSI total.

With this wonderful and unprecedented thaw, everything has changed. We now stand at 31 WSI so far for the season. That is good, but far more than we have had in the previous five years. In 2016 (See https://wlags.wordpress.com/2016/02/20/the-matriarch-moose-of-j-e/) and 2017 for example, we had only 1 WSI for each of the last two months.

However, it all comes down to March and April. Those are the “make it or break it” months. We are in a good spot for now, with the deer and turkeys able to move about freely.

Today I ventured out to check snow depths in the woods. They ranged from bare ground in the large evergreen groves to 8” on the northeast-facing slopes. Four inches is a good average of what I saw.