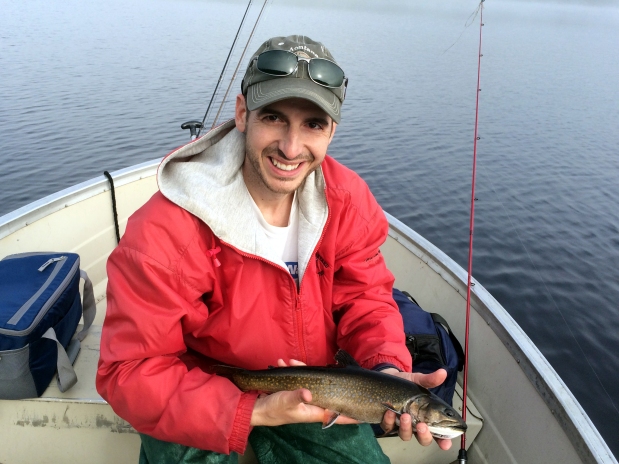 After a season of coming up mostly short of our plans and expectations (Exhibit A: Just When You Think You’ve Figured It Out), it’s nice to have a trip meet or beat those plans and expectations. This was that trip. I had been humbled too many days this season. I, or rather we (Tony and I), needed this one.

The trip was to Bosebuck Mountain Camps on Aziscohos Lake, but the fishing was to be done at Parmachenee Lake, where we had fished for a day last September. (See 60 Years of Waiting.)

Like last year, it was to be a quick, one-day-plus trip. The goals were simple, catch fish, native brook trout and wild landlocked Atlantic salmon, and hopefully one of us would catch the biggest brook trout of our life.

Things did not look bad as far as the weather forecast was concerned, but those forecasters had been a major factor in the disappointments in our earlier trips, especially in June. Sure enough the forecasters were wrong again. They had called for clouds and maybe some showers, which would have been beneficial to our cause. Instead, Monday morning’s fog broke with an absolutely clear sky and no wind. We started to think that we were jinxed again.

We had a big advantage this time though. A good friend had fished here last week, and he gave us some strong tips on where to start. If the fish had not moved much, that information could save us hours of exploration. His info was still right on target. Once we neared the rocky shoreline that he suggested to us, we were almost immediately into fish, and it was very obvious why. There were dimpling bait fish in a variety of sizes all along the shore and the rocks.

In fact the first brookie I caught regurgitated a 3½” baitfish that we think was a fallfish. We were not able to get a great look at it as it slipped towards the bottom as we netted the 13½” brookie.

It did tell us that we were on the right track by fishing my Carrie Stevens-style streamers that I had tied over the last month. The law requires that we use only flies here.

Again the conditions were far from ideal for anytime of the year, but particularly for August, so we were still guarded in our optimism, even after a few fish had come to net and quickly released. 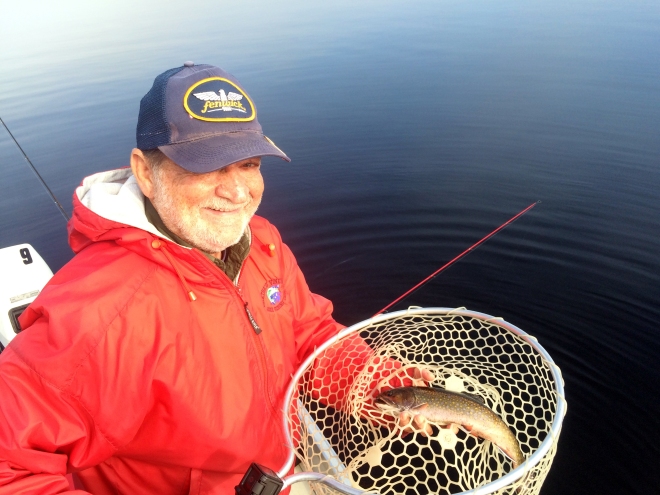 We were sticking to our plan, regardless of conditions, and we were getting enough strikes to keep us optimistic and motivated. We managed a couple of landlocked salmon and smaller brook trout. 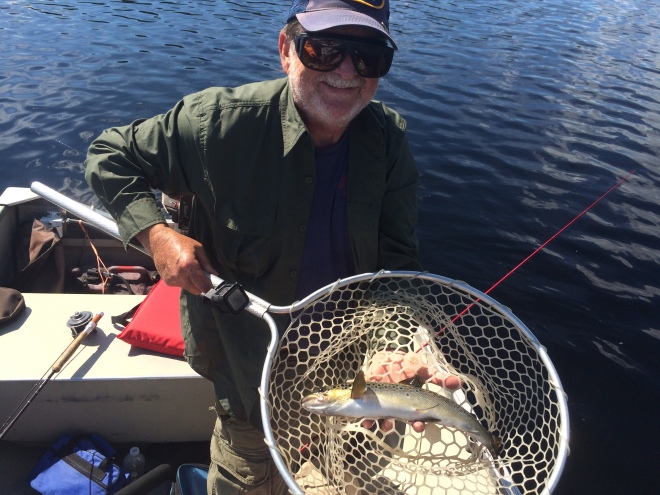 We each even caught a six-inch rainbow smelt; a first for Tony, and only the second time I had a smelt take a fly or lure. 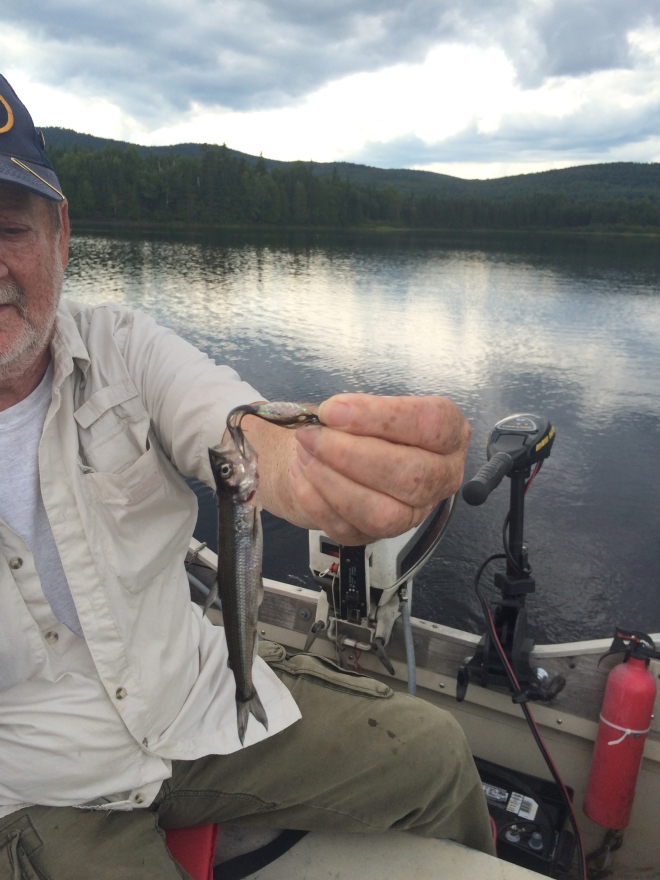 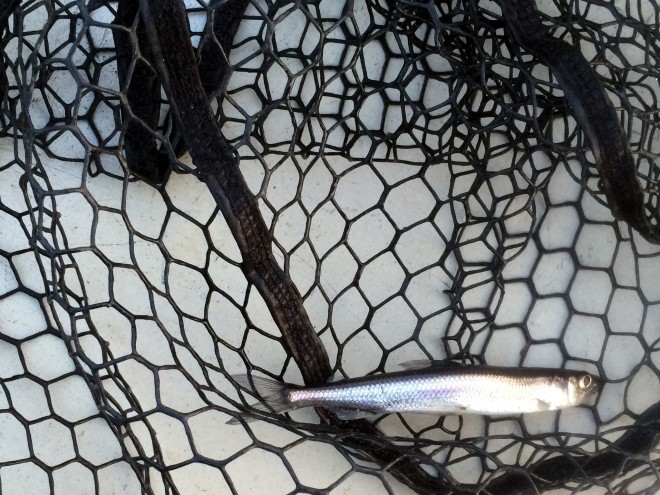 Suddenly Tony chirped “I’ve got one,” followed by “it’s a good one!” I knew instantly it was just that. Now the only question was, “Was it a salmon or a brookie?” Not that there is anything wrong with a landlocked Atlantic salmon, but our primary target was the native brookies of the Kennebago strain.

The fish was obviously heavy and then started shaking its head. At this point, we were hopeful that it was a brookie, but we were still not sure. As it neared the boat, it became obvious that it was a brook trout. Suddenly it came into view from the depths, and it was confirmed.

It was a fat, hooked-jawed male that was starting to color up for the upcoming spawning season, still a month away. I started to shake as I said to Tony, “It’s the biggest brookie of your life!”

The Parmachenee Belle fly I tied appeared in the corner of its mouth as I slipped the rubber net under it.

My Version of a Parmachenee Belle Fly

Tony mounted a GoPro on the handle of the net to help capture the moment on film.

Net With a GoPro

I was visibly shaking as the fish came to the net. I believe that I was at least as excited as Tony, if not more so.

He had worked hard for this moment, and had had several close calls in recent years. I’m sure it was a moment that we will remember forever.

A Moment That We Will Remember Forever

That moment made the tribulations of our earlier trips a distant memory, and we are already making plans for next August on the lake named after a beautiful Abenaki princess.

We here at WLAGS want to give you what we deem an honest evaluation of lodges, camps, and other places we have been. Today, we’re giving you our opinion of Bosebuck Mountain Camps, and sharing some of our photos of our stay there. 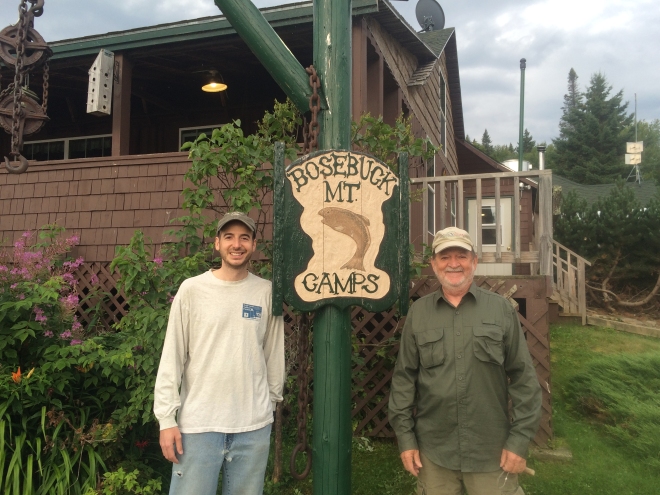 The Camps Have Improved a Lot Since 1907 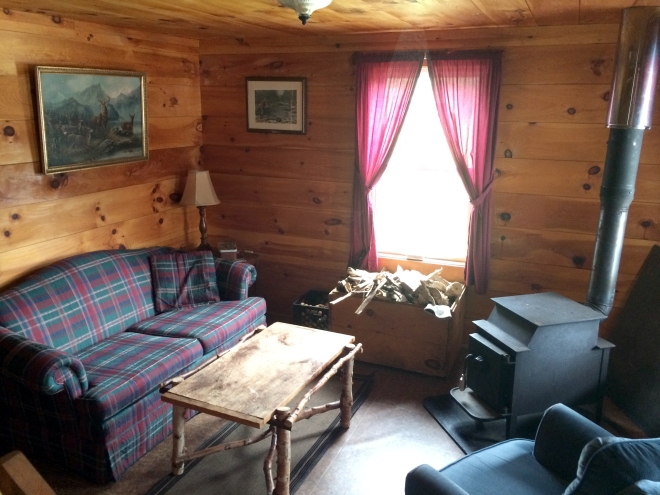 This Is One of Their Newer Cabins

Food dinner: N/A (We had bagged dinners to allow us to fish straight through dinner time.)