Fishing is a most humbling sport.

I could hardly sleep last night, anticipating the almost perfect trout fishing conditions of this morning.

I was going to a pond that has humbled me on a number of occasions.

I was unbelievably upset when upon my arrival, the sky went cloudless and the temps rose like a rocket.

This after making the 50-mile trip in rain.

What was I to do by fish anyway?

5 minutes in I drop a brookie at the boat. 5 minutes later I land a 13″ rainbow. 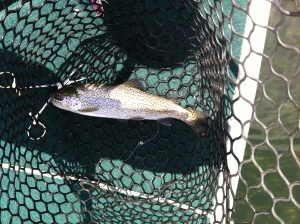 10 minutes later I hook and land an 18″ brown. The reddest brown I have ever seen.

10 minutes later I hook a 16″ female. So silvery she looked like a salmon.

This one rips me up. During the fight he spits up a 4″ blacknose dace.

When I get him to the net he has 2′ of mono coming out his vent.

I relieved him of the exposed portion before releasing him.

10 minutes later, I hook a nice probably 16″ rainbow, that throws my hex imitation back at me.